During embryonic and foetal development, the masseter is formed from two successive generations of muscle fibers in a manner which is very similar to that which has been previously described for other skeletal muscles. This phenotype
is characterised by the persisten ce of ontogenic myosin isoforms ( embryonic and foetal myosin heavy chains, embryonic light chain) and by the presence of two distinct populations of fibers : small diameter fibers which coexpress the
embryonic, foetal and fast isoforms of the myosin heavy chains but never express the slow isoform; large diameter fibers which express the slow myosin heavy chain either exclusively or in variable associations with the other isoforms.
These characteristics of the human masseter muscle probably correspond not only to its embryological origin and its special innervation, but also to the functional constraints to which it is submitted after birth. 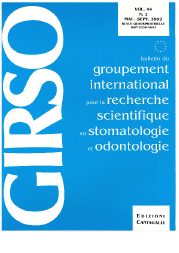 I hereby certify that the authors of the above manuscript have all:

1. Conceived, planned, and performed the work leading to the report, or interpreted the evidence presented, or both;

2. Written the report or reviewed successive versions and shared in their revisions; and

Further, I certify that:

1. This work has not been published elsewhere and is not under revision in another journal;

2. Humane procedures have been followed in the treatment of experimental animals (if applicable);

3. Investigations in humans was done in accordance with the ethical standards of the responsible committee on human experimentation or with the Helsinki Declaration (if applicable).

4. This paper has been carefully read by a native English speaker who is familiar with the field of work (this applies to authors who are not fluent in English); and

5. The copyright of the article is transferred from the authors to the Bulletin du Groupement International pour la Recherche Scientifique en Stomatologie et Odontologie upon acceptance of the manuscript.