The geometry and kinematics of active faults have a significant impact on their seismic potential. In this work, a structural characterization of the active Baza Fault (central Betic Cordillera, southern Spain) combining surface and subsurface data is presented. Two sectors are defined based on their surface geometry: a northern sector striking N–S to NNW–SSE with a narrow damage zone and a southern sector striking NW–SE with a wide damage zone. A kinematic analysis shows pure normal fault kinematics along most of the fault. Geometric differences between the northern and southern sectors are caused by i) a heterogeneous basement controlling the fault geometry at depth and in the cover; ii) different orientations of the Baza Fault in the basement with respect to the regional extension direction and iii) interaction with other active faults. We use this structural characterization to analyse the segmentation of the Baza Fault. According to segmentation criteria, the entire Baza Fault should be considered a single fault seismogenic segment. Consequently, the seismic potential of the fault is defined for a complete rupture. Magnitude for the Mmax event is calculated using several scale relationships, obtaining values ranging between Mw 6.6 and Mw 7.1. Recurrence times range between approximately 2,000 and 2,200 years for Mmax events and between 5,300 and 5,400 years for palaeo-events. A geodetic scenario modelled for an Mmax event of Mw 6.7 shows permanent vertical displacements of more than 0.40m and an overall WSW–ENE extension during entire ruptures of the Baza Fault. 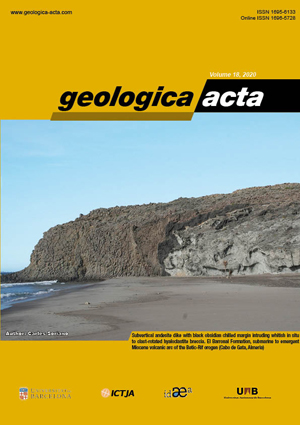