The year 2022, the centenary of José Saramago's birth, is an opportunity to revisit a work of unique global projection and a thought which, while pointing out the challenges of yesterday and today, continues to be fully current and has an unequivocal interdisciplinary vocation. One of the debates (re)opened by Saramago was that of the need for an Iberianism, not understood in the old way, but as a dialogue established from the reflections of postcolonial and decolonial studies. José Saramago's vision of Iberianism took shape progressively after the publication of the novel A Jangada de Pedra (1986), conceived in the context of the incorporation of Portugal and Spain into the European Economic Community. According to the writer, the Iberian Peninsula is a cultural constellation, it cannot be interpreted outside its historical relations and, as such, it has to maintain a constant link with Ibero-America, Africa and the other territories where an Iberian cultural presence is significative. Saramago baptized this aspiration with the name of transiberism, which makes it possible to conceive of an intellectual displacement of the world that goes beyond the great centres of power and offers a broad understanding of cultural identities (Iberian and otherwise) and of the political and cultural responsibilities of colonial expansion. In this and other respects, the thought and art of José Saramago are decisive for thinking about the changes in paradigms that have taken place between two millennia, especially with regard to the poetics and politics of difference and identities.

Articles can be written in Galician, Portuguese, Catalan, Spanish or English and must adjust to the journal's editorial guidelines. The deadline for submissions is 30 October 2022. The monograph Saramago and transiberismo is coordinated by Víctor Martínez-Gil (Universitat Autònoma de Barcelona-Càtedra José Saramago) and will be published in issue 12 (2023) of Abriu. Proposals will be subject to blind peer review and can only be submitted throught the Abriu website (https://revistes.ub.edu/index.php/Abriu/index). 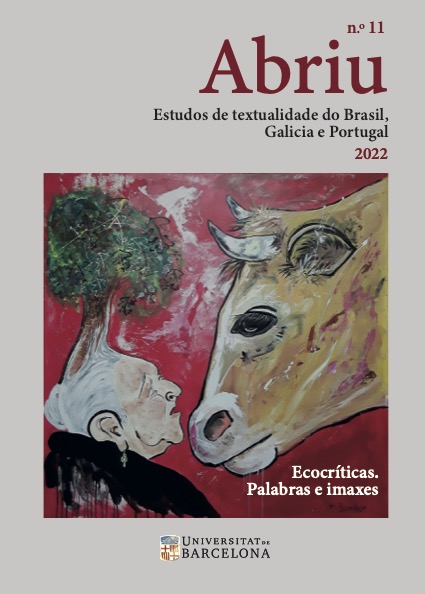 Volume 11 of Abriu, journal of Galician and Portuguese Studies of the University of Barcelona opens with a monograph dedicated to "Ecocritiques: Words and Images" which presents seven articles analysing discourses and practices that explore artistic creations, often hybrid, where nature and gender intersect. This monograph is complemented by articles in the "Open Space"; section on two artistic research experiences and on the poetry of Luísa Villalta. The "Miscellaneous" section includes three works on medieval profane lyric poetry and a study on the relationship between literature and tourism in Portugal. The reviews are devoted to works on historiography, Iberian feminisms, translations of Haroldo
de Campos and the centenaries of Jorge de Sena and Sophia de Mello Breyner.

View All Issues
The journal ABRIU allows admissions — original texts only — for the following sections: dossier, miscellany, open spaces and reviews. All texts for Monograph and Miscellany are submitted to at least two external double-blind peer reviews. The languages of the journal are: Galician, Portuguese, English, Catalan and Spanish.
Statistics 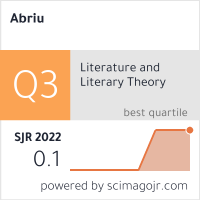