Practice on Design of Socio-Educational Projects (Degree of Education) training strategy adopted as a game of social simulation, where students (N = 161) were to design their own project of sustainable development in rural areas was adopted. They were divided into three groups, which introduced variants in relation to digital tools used for collaboration: 1) blog, 2) wikis, and 3) social networking, and after completing its realization is asked to identify, through a questionnaire, generic competences considered to have acquired and / or consolidated with gamification process in which they actively participated. The comparative analysis between groups and contrast corresponding hypothesis showed significant difference. Those who used the wikis and social networks perceived an increase in their competences for written communication and skills to collect, organize and manage information with simulation. Similarly, students who lacked experience in developing collaborative projects with the use of ICT improved their digital competition. Furthermore, it was found that the use of game mechanics in support of learning not only increased their motivation and level of satisfaction with the project, but the acquisition and development of key generic competences are enhanced.

The authors who publish in this journal agree to the following terms:

In order to mention the works, you must give credit to the authors and to this Journal.

Digital Education Review, DER,  does not accept any responsibility for the points of view and statements made by the authors in their work. 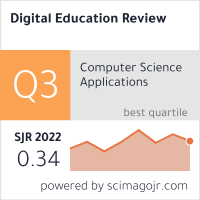