NOTE May 2016:
Sonia Berjman, who edited the textbook of Benito Carrasco, asks that the author recognize the origin in the article. The book of compiled writings of Benito Carrasco, edited by Dr. Sonia Berjman: Benito Javier Carrasco: his texts. (Faculty of Agronomy, University of Buenos Aires, 1997, 258 p.) Has been largely the source of the texts of Carrasco used in this article.

Buenos Aires has a river. Although it has been repeated for decades that the city gave it back, the recent interventions in the urban areas of the edge they confirm that the river is there. But this is not the only demonstration. On one side the river has been present in the imagination of the city skyline from the edge and its foundation. And secondly, the use of the shoreline as apublic space, especially as leisure predates the beginnings of urbanism as a discipline.

The coast of Buenos Aires, as the fronts of many other coastal cities in the world has been invaded by urban interventions in recent decades. Spaces of real estate development, residential, commercial, corporate and public spaces, have changed the facade of the city from the river and the use of this particular area of the edge. This phenomenon is worldwide, and has been awarded to the growth and transfer of the ports by the obsolete condition of the old port. Much of the proposed re-functionalization
of the coastline was carried out during the eighties, producing a number of marinas, theme parks and reconstruction of historical sites, which tend more to the standardization that the diversification of spaces for use of citizens. But this phenomenon does not belong exclusively to the last decades of the last century. Early interventions in the urban coastal fronts began with the discovery of the coast and leisure in the mid-nineteenth century.

The discovery of the coast and leisure had been born since the late eighteenth century with the loss of fear of water, the new value given to science and currents of thought of the Enlightenment and the Romanticism of the time, which would Grand Tour of Europe. This assessment of costs is not reached the industrial cities until the last decades of the 1800s. Several European cities had previously coastal walks, but these were not from a planned urban spaces shared with the port and its aim was solely that of a contemplative walk.

In Buenos Aires, as in other American cases, the start of the use of the coast and leisure was very early, compared with its parallel in Europe. While in New York and Chicago Fredrick Law Olmsted and Calvert Vaux were imposing a new use of public space and urban nature in contrast to the growth of cities, Domingo Faustino Sarmiento raised the first projects for the Tres de Febrero Park, the first coastal park the city of Buenos Aires. The authorities, architects and engineers who worked on the draft coastal parks saw these spaces as places of opportunity, as horizons for action, being edges of the city provided a special place for the development of public space. From an aesthetic professionals in charge saw the horizon as a scenic attraction, while from the practical side, the waterfront was the edge, so the city and an area of conflict between national and municipal authorities.

In this article we will look at one of the most significant projects for the coast of Buenos Aires at the beginning of the consolidation of the use of the waterfront as public space for leisure. We will concentrate on the case of the South Coast as an area of leisure activities integrated by Benito Carrasco in 1918. 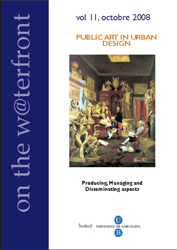