This paper examines aspects of the relationship of street art to the urban fabric of Athens, from the late 1990s, through the 2004 Summer Olympic Games, and well into the financial and socio-urban crisis grappling all aspects of the city’s social and physical landscapes. The paper uses a one by one-and-a-half kilometre section in the northwest of central Athens as an area of study.
In the first section, an ascending scale and scope of engagement between commissioned
graffiti art and architecture can is clearly traced during the years of economic development leading to the Olympic Games of 2004. One finds that, in the area of study, initial, smaller works on disparate parts of the urban landscape give way to compositions on interior and exterior walls of institutional and residential buildings, and eventually commisssioned works appear on complete perimeter walls and envelopes of industrial and transportation complexes. In the tradition of Gothic sculptural exteriors or Byzantine mural interiors, these works, like new ‘medieval cathedrals’, communicated to the urban masses of Olympic Athens a variety of sponsored visual narratives that their patrons wished to relay. While the agenda was certainly not religious, it is argued that the social, political, economic, and at times even ethical intentions of the commissioned art are more than evident.
The second section engages the years of economic downturn following the Olympic Games, from 2004 to 2008. It is found that a younger generation of street artists, who appropriated both new and older disused buildings, understood the power of architecture to display their noncommissioned work and make their intentions known to the city. With the signigficant help of both private and state art institutions, such as the Deste Foundation and the Athens Biennale, the work of these artists became more widely known and circulated. In turn, the artists used the vast possibilities presented by the disused urban fabric to not only transport and instantly deliver their work’s meaning and message to the city, but also to express their generations’ (few) hopes and (numerous) fears, and to ultimately foreshadow the coming socio-economic crisis.

The third section concerns the post-2008 years of crisis in Athens. Street artists were deeply affected by the city’s new plight. Artists turned not only to disused but also to destroyed architecture as their new urban canvas. Using the work of four artists within the area of study, it is evidenced that noncommissioned art was now carefully choosing its sites according to what message was to be conveyed and who the intended audience was.
Unavoidably, artists became ever more political as their work emerged on the urban and architectural corpses. A sense of the unknown, of ‘what next’, waited at the end of the painted walls. It can be concluded that Athenian street art, always within its specific constructed sites and context, functioned as both an anticipation and a reflection of the socio-urban conditions and developments of the years from 2008 to 2012, and it remains key to the interpretation and understanding of what a whole generation hopes and expects from its city through these quickly changing socio-urban times and landscapes. 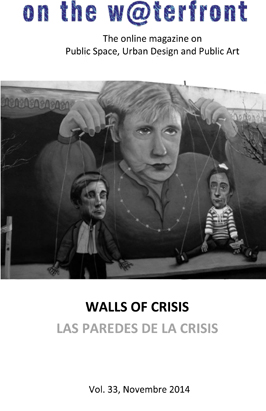