PUBLIC ART AND ARTICULATION WITH THE WATERFRONT IN LISBON

The paper is based on the study of the relationship between the inner city and the waterfront, from the case of Lisbon, by means of the urban structures that link these two realities, called structures of articulation with the waterfront.
The starting point is the identification of a territorial system underlying the urban structure: the comb structure, consisting of two logics: the horizontal logic (urban axes parallel to the waterfront) and the vertical logic (urban axes transverse to the waterfront).
In this system, public space plays an important role, because of its articulating properties and of the way it physically and visually allows the connection with the waterfront.
But this is also a symbolic system. This research assumes that the different ways of physical and visual connection are related with one key factor: the existence of public art in those structures of articulation.
Assuming the articulation with the waterfront as a complex reality, that should be observed by the crossing of different disciplines and analysed from its different aspects, which characterize it, this paper focuses on one of these aspects: the relationship between public art and the structures of articulation.
First, the article quantifies the elements of public art in each of the 20 transversal axes and throughout the territory, observing the most charged areas. It also analyzes the different historical moments of placing (focusing on the date of placement in the public space, no on the date of the production of the different works), relating the chronology of placement of public art with the chronology of the interventions in the city.
Then, it focuses on the belonging of the different elements, in each transversal axis, to the scope here defined as waterfront (the areas with a morphological unity within the overall organization of the respective cities, which correspond to the corridor of contact with the dividing line between land and water).
Finally, the article explores the different ways of placement in their respective public spaces and along the structures of articulation, identifying and establishing parallels with other ways of placement, in different space-time contexts.
At the same time, as a matter of background, it is intended here to prove that the placement of public art in the transverse axes is a way to enhance its physical and visual articulation with the waterfront, contributing also to the construction of a proper identity in port cities. 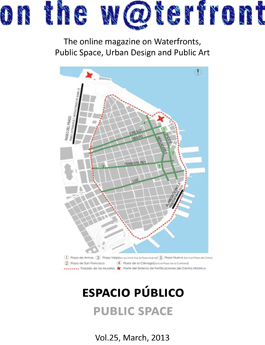