In 1940 the Salazar regime celebrated two historic dates (1140 and 1640) wich were considered representative of the Nation. The dates correspond to the formation of the kingdom of Portugal and the proclamation of independence against the Portuguese kingdom of Castile. In 1938, the dictator Salazar disclose the program of the celebrations and appealed to public services to show commitment to the preparation of the event, demonstrating the "great capacity to achieve in Portugal."
The construction of a monumental fountain was one of the initiatives practiced by public services in response to the call from Salazar. The proposal, presented formally in 1938 by the Supervisory Committee of the Waters of Lisbon, belonged to the Ministry of Public Works and Communications, then headed by Duarte Pacheco. The project counted two sets of sculptures and two ceramic panels, complementing the architectural structure of the monument. There were also considered programs based on effects of water and light as an element that values the work. The territory of Alameda D. Afonso

Henriques was chosed for the deployment of the monument. However, the construction of the work, estimated at 480 days, dragged on for ten years (1938-1948). During this period, development work was reported with enthusiasm by the press, through articles in newspapers and magazines, propaganda disseminated by Salazar.
The purpose of this article is publicizing the events that led to the delay in completion of this work, seeking to expose the entire order process from beginning to its completion in 1947.
It begins the article contextualizes the genesis of the project, an integral in the planning of celebrations of the centennial and its relief by the press, commenting on published articles. Then, we describe the development phases of the work, trying to explain the reasons of economic and technical that led to the postponement of the project and caused delays in implementing the work until its completion.
The research was based primarily on data collected in the process of work, existing file. The journals have been the prime source to describe the construction of the Monumental Fountain. However, given the political context of the time, the journals say little about the logic that led to the belated realization of the work, since their concern is, above all, credibility and consolidate the political image of the regime. In this study, the consultation of journals made by the need to contextualize the motivations of political and ideological order that accompanied the launching of the construction. In the absence of justification on the grounds that caused the delay in the work, we used to see the file's administrative order. This made it possible to obtain unpublished data on the construction of commemorative works such as launching an international tender for electrical installation and plumbing of water games or contingencies that led to the tardy commencement of the works and the replacement of material originally intended for artistic commissions. 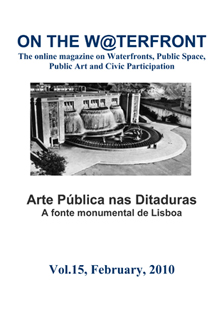 No. 15 (2010): Public Art in Dictatorships. The monumental fountain of Lisbon