This research has a clearly interdisciplinary approach, and focuses on the relationships and complementarities between three concepts, with direct influence on the processes of urban transformation: public art, citizen participation and public space. The central issue of the research is the project "Cartographies of La Mina" which developed, between the years 2002 and 2006, a process of citizen participation relating art and public space, in the neighborhood of La Mina, Sant Adrià, Besós.
The work focuses on the research line developed by the Centre de Recerca Polis (Polis CR) - Universitat de Barcelona, which establishes goals and procedures for the analysis and improvement of public space projects through the development of participatory processes. This thesis

reflects on the aforementioned line of research, studying creative methodologies developed by the research centre, bearing in mind the academic context in which it operates.
The theoretical framework developed, considers the main relations between the processes and challenges of citizen participation and the problematic of governance. Special emphasis is given to the relationships and complementarities between the issues of urban design and public involvement. Moreover the author studied the evolution of public art, examining its multiple dimensions and its development over the twentieth century. In this study special attention was given to the connection between the artistic elements and urban space.
Nuria Ricart establishes as a central focus of her research the relationship between public art, public space and civic participation, introducing the idea of a cross-cutting issue. It is precisely on this issue that lays the originality introduced by the author with this work. 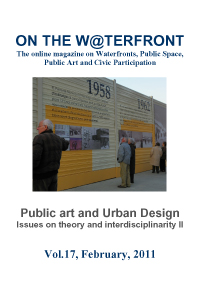 No. 17 (2011): Public art and Urban Design. Issues on theory and interdisciplinarity II