Urban territories frequently face problems related to the lack of cohesion -  a working fact for planning and urban design processes. If a certain territory is not accessible or visible and is not socially and economically balanced, its chances of urban success are practically non-existent. Aiming to tackle these problems, we argue that “city making” must incorporate urban cohesion processes involving two dimensions: [1] the city’s form issues; and [2] its socio-economic and socio-cultural factors.

Intending to contribute to the strengthening of urban cohesion (Pinto & Remesar, 2012a), we propose a method capable of assessing the cohesion of public space networks, not only within the neighbourhood, but also their links to the surrounding city networks. With this method we intend to identify the main critical points where urban cohesion fails, paving the way for the definition of intervention strategies promoting cohesion.

This assessment method, is not limited to the study of the morphological factors, but also includes the social and economic dynamics generated by the public space network. For this reason we do not propose a strictly quantitative methodology, but instead we include qualitative factors, once we consider the dynamics generated by social appropriation and urban functions vital to evaluate urban cohesion processes.

With this in mind, we have analysed one study case in Barcelona – the Barceloneta neighbourhood, a historic quarter outside the old walled city that is now part of its consolidated urban fabric.

The analysis of this case allows us to assess both (1) the role that the urban layout plays in the configuration of the public space network, forcing us to reflect on the role of “boundaries” as fundamental elements in the articulation among the local and overall public space networks in the city; and (2) the role of several socio-economic dynamics affecting to the everyday life of these neighbourhoods 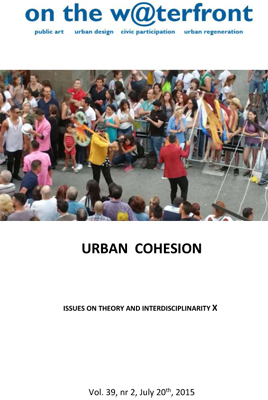