The urban structure hosts an enormous variety of factors and interactions that, on one hand, reveal its interest and uniqueness but, on the other hand, leads to some of today’s problems of territorial cohesion.
Public spaces have a fundamental role in the urban structure and city life, as they allow for formal and environmental continuity, accessibility, visibility, contributing to the reinforcement of social and economical centralities. Therefore it is fundamental to think of public spaces as important instruments on promoting territorial cohesion. The need to adapt public spaces to each site’s specificities, in a local perspective as well as on the broader scale (city, region) becomes evident, highlighting the necessity for the articulation of both scales, in the way of promoting a cohese and inclusive territories.
It is on the often unstructured cities’ peripheries, with their peculiar urban characteristics, that these interventions assume a greater importance, as with the case of the Barrio de La Mina, in Barcelona. 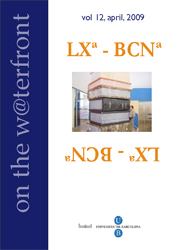