CITY GROUND DESIGN AND THE IMAGE OF THE CITY: THE PORTUGUESE CALÇADA

From the mid of the XVIIIth century, all cities faced one of the fundamental changes in the structure of their landscape. Increasing in population and economic activity involves the disappearance of earthy streets, refurbishing them with sidewalk, turned into the support structure of the services of the road, and road traffic space.
In Lisbon extends the paving of the road following the "systema Portuguez" with irregular basalt and sandstone elements, and already in 1834 is set on " Pelouro das Calçadas" liable to experience, first, the system "macadam" (c. 1839 ) and subsequently and gradually introducing the asphalt.
The sidewalk is treated mostly with limestone slabs that from the last third of the century will be replaced by the "ordinary Portuguese pavement" in limestone. A referral is the "ditto de mosaico" pavement. This pavement was experienced by Eusebio Pinheiro Furtado in the São Jorge Castle (1842), and will extend to all the city, especially since the paving of the "Mar Largo" in the Rossio (1848). Thus, during the extension of sidewalks along Camões Sq., Cesar Augusto dos Santos, Inspector of the Admistration of streets, expresses substitution policy paved the cobblestones "The system to employ in the clumping of these walks should be mosaic, not only by the beauty that presents as because it is an art in this city, a beauty that can lead to end up choosing a simple pattern but trying not exceeding 500-600$ square meters" (Cesar dos Santos 1869). Finally, in 1895 the City Council decreed the use of "stoned to Portuguese" in any new paving and sidewalk reconstruction.
Representative sites of the city are qualified artistically with this way of doing so identitary and characteristic, not for nothing we could understand it as one of the first extensive productions of public art in the contemporary sense of the term. This paving system extends over Portugal and went international in Spain when Júlio César Augusto Cordeiro patented in Madrid (1895) the "Portuguese mosaic" that crystallize in the sidewalk of Paseo de San Juan in Barcelona (1896) - before the Paris Exposition of 1900, the Praça de São Sebastião in Manaus, the Rio Branco and the Atlantic avenues in Rio de Janeiro- coming to live with "modernist" street lights that Pere Falqués designed for "Cinc d'Oros" in Barcelona.
The Portuguese calçada forms part of the identity of Lisbon and affects the brand image of the city. However, despite their identity and artistic value, the calçada is in mortal danger.
The pavement-form - including the "calçada-form"-is at the root of some of the flagship operations creating the image of the city (Havana, 1928; Alicante, 1957; the Ramblas in Barcelona, 1969; reform of the Avenida Atlantica in Rio by Burle Marx, 1970). However, these same operations show that the "form-calçada" does not meet many of the requirements of economy, security or universal accessibility required by the contemporary city. In the paper was to analyze the causes and reasons that hover over the announced death of calçada á Portugueza. 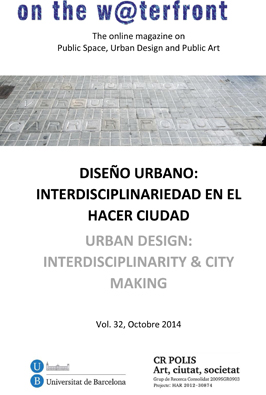 Esparza Lozano, Dánae, and Antoni Remesar. 2014. “CITY GROUND DESIGN AND THE IMAGE OF THE CITY: THE PORTUGUESE CALÇADA”. On the W@terfront, no. 32 (October):5-36. https://revistes.ub.edu/index.php/waterfront/article/view/18833.
Download Citation